The frequency and intensity of extreme weather events is projected to increase in the Southern African region. In Zambia, climate change could negatively impact economic growth, agricultural production, and energy supply. Zambia’s dependence on rainfed agriculture exposes it to climate shocks and makes rural households vulnerable to climate change. Furthermore, climatic changes have led to significant electricity shortages, as Zambia’s electricity system is dominated by hydropower. To avert the impacts of climate change, there is a need to develop effective adaptation policies and invest in climate-resilient technologies.

Changes in rainfall by 2050 are even less certain. On average, rainfall is projected to neither increase nor decrease substantially under either global mitigation scenario; however, increases or decreases of more than 5% are possible, with more extreme outcomes substantially more likely when global emissions are unconstrained

Climate change scenarios typically result in a decline in Zambia’s real annual GDP growth rate. Under unconstrained emissions, growth in GDP is projected to reduce much more at about 2% by 2050 compared to a 1% reduction under strict global mitigation by 2050

The impacts of climate change on infrastructure, notably roads, is what creates the most uncertainty for Zambia’s economy

Figures 1 and 2 show the range (horizontal axis) and likelihood (vertical axis) of temperature and precipitation changes, relative to 20th century norms, for Zambia under the two global emissions scenarios in focus. Under unconstrained emissions, notably more warming is expected to occur and the likelihood of changes in precipitation greater than 5% (increases or decreases) is substantially higher. Under all scenarios, substantial warming is expected, and this warming may be accompanied by changes in total precipitation and/or its timing and character. 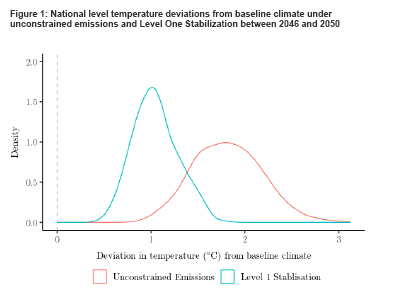 Modeling the impacts of climate change 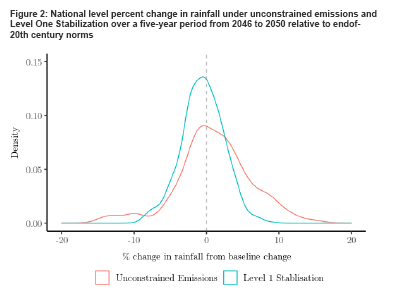 Figure 3 uses the same approach as Figures 1 and 2, applied to GDP. Under both emissions scenarios, climate change typically results in a smaller economy by 2050, due to reduced GDP growth rates. Greater climate change under unconstrained emissions leads to slower expected rates of economic growth. 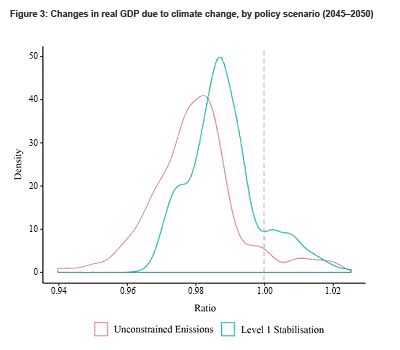 Agriculture is also negatively affected under both scenarios. Changes in rainfall and temperature will likely lead to progressive declines in crop yield and production. Climate change is also expected to directly reduce net agricultural exports, assets, and household expenditure and indirectly affect input prices and off-farm employment opportunities. With about 22% of the population employed in the sector, agriculture remains an important employer and the largest source of income for low-income households. Climate change thus poses a threat to livelihoods of more vulnerable populations.

At the sub-national level, the southern and western regions of Zambia are projected to suffer the most substantial negative impacts of climate change on crop yield and production, making these regions progressively more vulnerable.

Zambia’s electricity supply, road infrastructure, and agricultural systems are likely to be adversely affected by climate change. There is a need for Zambia to develop adaptation policies and explore climate-resilient options. For electricity supply, these options should emphasize investments in climate-resilient technologies such as solar, ideally buttressed by reliable regional trading arrangements. To ensure security of supply, Zambia should explore trade options for electricity from the regional market alongside diversification in generation capacity beyond hydropower. For roads, infrastructure development plans need to be adapted to new, warmer, and potentially more flood-prone climatic conditions in order to improve resilience.

Zambia should invest in climate-resilient technologies and road infrastructure

In order to maintain agricultural productivity, improve food security, and increase welfare, there is a need to pay particular attention to improved agricultural technologies

Means to diversify electricity supply, including consideration of electricity trade via the Southern African Power Pool, should be evaluated, decided upon and implemented.

There is a need for well-considered investments in agriculture to maintain development trajectories and reduce hunger and poverty. Forestry and agriculture should be better coordinated, through integrated land-use planning. To minimize the impacts of climate change, policy actions should focus on the development of a sustainable, robust and climate-resilient economy for Zambia. Finally, Zambia would benefit from successful efforts to reduce emissions globally, even by 2050.

More details are available in the working papers on impacts of climate change on energy and agriculture in Zambia.